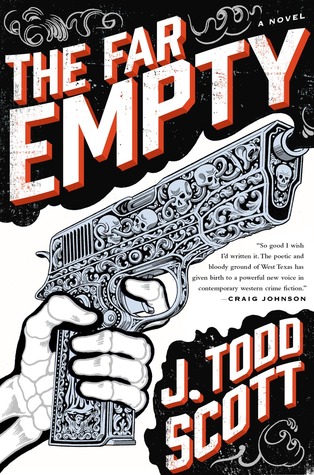 Sheriff Ross is a powerful man. There is no doubt in the minds of his deputies, the citizens of border-town Murfee, Texas, and the rest of the country.  A hero. But is he a good man in a place where good and bad have become subject to interpretation? After all, the border drug trade is alive and well, people have gone missing– including his wife, a senior deputy dabbles in mystical and dangerous habits, the teacher with a dark past suspects the helping hand she was given, and his own teenage son lives in fear. All in a small town with nowhere to hide.

When a young deputy begins to investigate the identity of a skeleton found in the desert despite being told to move on, he finds secrets that trigger such a violent chain of events in the county and across the border that it may be impossible for anyone to return to safety and sanity.

This is a book that is not for those who can’t stomach vivid violence and brutality. It is brutal from page one to the end, but not unnecessarily so. Every single one of those terrible moments adds up to a brilliantly rendered page-turner that is impossible to put down or to forget. Scott has given us a guided tour of a deliciously unpleasant world that we hope doesn’t really exist. One that none of us wants to visit, except vicariously.

Read it to get gut-wrenching chills and thrills. Don’t worry if you find yourself empathizing with a teenager who wields a machete.

I received a copy from the publisher and goodreads in exchange for an honest review.